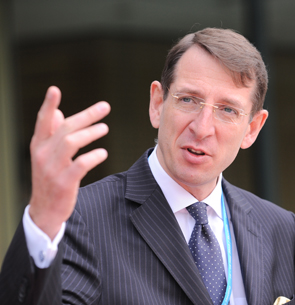 Dr. Frank-Jürgen Richter is the Chairman of Horasis: The Global Visions Community. Horasis is an independent international organization committed to enacting visions for a sustainable future. Horasis is using its unrivalled history of partnership with corporations from emerging markets to create a powerful platform for cooperation between emerging and developed markets.

The flagship events are the Horasis Global Meeting as well as regional summits focusing on China, India, Russia and the Arab world. Prior to founding Horasis, Dr. Richter was a Director of the World Economic Forum. During this time he has developed an extensive experience and knowledge on the world’s economic, business and political scene and of its key players. Under his leadership, the Forum’s Summits in Asia and the Asia part of ‘Davos’ have evolved to facilitate the exchange of expertise between leaders in business, government, and civil society. He has lived, studied and worked in Asia for almost a decade, principally in Tokyo and in Beijing where he developed and managed European Multinationals’ China operations. As one of the leading analysts of international business and emerging economies, he influences major business and governmental decisions with his public commentary. He has a thorough understanding of how the world functions today – an understanding created through an on-going interaction with top business, political and intellectual leaders around the world.

Dr. Richter is also an active scholar and has authored and edited a series of best-selling books on global strategy and Asian business. His most recent books include: Global Future, Six Billion Minds and Recreating Asia. He has addressed audiences at the World Economic Forum, Brookings Institute, Harvard University, Beijing University, Royal Institute of International Affairs, and several high-level corporate events. His writings appeared in the financial and regional press, such as The International Herald Tribune, The Wall Street Journal, The Far Eastern Economic Review, The Straits Times and the South China Morning Post. He has been interviewed by several publications and appeared on CNN, BBC, CNBC, CCTV (China Central Television) as well as the Voice of America. Dr. Richter was educated in Germany (his home country), France, Mexico and Japan. He is a fluent Mandarin and Japanese speaker.

The current state of the world is rather gloomy. Globalization appears to be in suspension – divergent forces make the future rather uncertain.