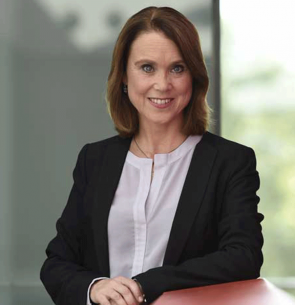 Petra Olschowski has been State Secretary at the Baden-Württemberg Ministry of Science, Research and the Arts since 12th May 2016. Petra Olschowski was born on 29th June 1965 in Stuttgart. Following the Abitur, she initially chose an apprenticeship as retail salesperson in the art trade.

In 1986 she subsequently started her studies of Art History and German at the University of Stuttgart which she completed with a Magister Artium. During her studies she worked as a freelance journalist for several newspapers and magazines, as freelance editor for the art book publishing house Hatje Cantz and the Bundeskunsthalle in Bonn, as lecturer for Costume Studies and Art History as well as curator of exhibitions both at home and abroad.

Starting with a traineeship, she then worked from 1996 until 2002 as editor for the Stuttgarter Zeitung, at first in the sports department, later in the department for home affairs and finally in the feuilleton. In 2002 she started as the executive director of the Kunststiftung Baden-Württemberg (Arts Foundation Baden- Württemberg) where she established interdisciplinary funding programmes. From 2010 on, she managed as the first female rector the Stuttgart State Academy of Fine Arts (Staatliche Akademie der Bildenden Künste Stuttgart).

For several years she was engaged in the culture committee of Stuttgart’s local council as an expert. Petra Olschowski held numerous  honorary posts, among others as the chairman of the committee of the administrative board of the Württembergischer Kunstverein, as  member of the board of trustees of the Federal Artist’s Social Insurance, in the commission “Kunst am Bau Baden-Württemberg” and in the curatorium of the “Triennale Kleinplastik” in Fellbach.